his position as an advocate of the study of Middle English 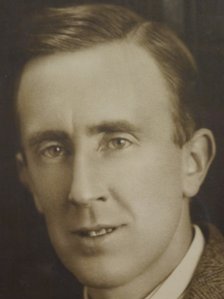 Having been given a free-hand in the revision of the English syllabus by George S. Gordon, Tolkien began to develop English studies at Leeds. He proposed the series of Middle English texts for study and was in favour of the normalization of texts. This would involve making the translation of the texts consistent in thier spelling.

Kenneth Sisam had suggested in January of 1921 that a student edition of 'Sir Gawain and the Green Knight' was long overdue. C. T. Onions suggested to Tolkien that he should prepare such an edition.

In October 1921 George S. Gordon asked the opinion of David Nichol Smith of a student, one Eric Valentine Gordon (no relation) who had been recommended by Tolkien for a staff position at Leeds.

With his family now in Leeds and after taking rooms at Holly Bank on the Otley Road in Headingley the Tolkien's had moved to 11 St Mark's Terrace, close to the University where they would stay till March 1924.