Reader in English Language at the University of Leeds

and arrived in the city take up the post 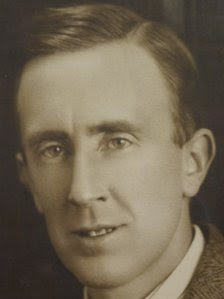 Tolkien would be joined by his growing family after his wife Edith gave birth (in Oxford) to their second son Michael. Initially Tolkien rented a room at 21a St Michael's Road, Headingley and returned to Oxford at the weekends.
As the Tolkien's approached Christmas 1920 they were starting down a road that would see the family move to Leeds and become part of the community of which the University was the centre.
To maintain the connection with his young family, Tolkien began a tradition that would last till the eary 1940s,  festive letters to his children. The first was written to his eldest son John, in Oxford (from Father Christmas, North Pole) in December 1920.
Posted by Ian Spittlehouse