The plaque is here! 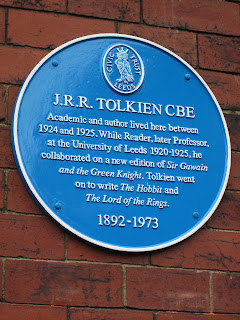 It has been a long journey to get here, but this morning the plaque was unveiled to an audience invited by the Tolkien Society, Leeds Civic Trust and the West Park Residents Association.

The plaque at 2 Darnley Road, West Park was unveiled by Dr Kersten Hall a visiting Fellow at the University of Leeds. 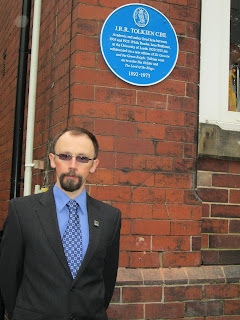 It was an honour to attend such an event and my thanks go out to everyone who helped make it happen.

Listen in to the Breakfast program tomorrow with Larry Budd and a piece about the plaque (between 8:30 and 9:00)
Posted by Ian Spittlehouse

A link to the online version of Leeds: Did Meanwood Valley inspire Middle Earth?

The Tolkien Society is pleased to announce that the Leeds Civic Trust will be siting a blue plaque at 2 Darnley Road, West Park, Leeds. Dr Kersten Hall, graduate of St Anne’s College, Oxford and Visiting Fellow to the Faculty of Arts at the University of Leeds will unveil the plaque on the 1st of October 2012. Ian Spittlehouse, Trustee and the Tolkien Society’s liaison with the representatives of West Park and the Leeds Civic Trust said, ‘This is a timely recognition of Tolkien’s tenure in Leeds, and a welcome addition to Yorkshire’s influence on his academic and literary career.’ J.R.R. Tolkien, graduate of Exeter College, Oxford, was Reader in English language at the University of Leeds, his family moved to Leeds residing briefly at 5 Holly Bank, Headingley and then leasing a house in St Mark’s Terrace. In 1924 Tolkien bought the semi-detached property in Darnley Road. He went on to be made Professor of the English Language at the university. The family lived there for over a year before Tolkien’s election to the Rawlinson and Bosworth chair of Anglo-Saxon saw them return to Oxford in 1926. During his time at the University of Leeds Tolkien was instrumental in shaping the English Language syllabus at the university; some aspects of this were still present sixty years later. He also worked with E.V. Gordon to produce an edition of the Middle English poem Sir Gawain and the Green Knight, which was published in 1925. Tolkien’s time in Leeds prefaced his long academic career at Oxford and the publication of The Hobbit and The Lord of the Rings. During his time in Leeds he was developing the story-teller’s art. He began writing The Father Christmas Letters, for his son, John, in 1920. In 1925 he composed a story for his second son, Michael, to explain the loss of a toy dog on the beach at Filey. This was eventually edited and published in 1998 as Roverandum. The plaque will be unveiled at 11:30am on the 1st October 2012 at 2 Darnley Road, West Park, Leeds.
Posted by Ian Spittlehouse

The plaque went into manufacture at the end of May and has been scheduled to be unveiled on the 1st October.
Posted by Ian Spittlehouse